Yesterday we reported on a nonexistent quote from Megyn Kelly being used by CNN to promote an article about Fox News. Before we published we made contact with the CNN editor who tweeted the fake quote and politely suggested that a correction would be in order:

@mxmooney @brianstelter You realize nowhere in the article does @megynkelly say she felt betrayed. This should be corrected @johnnydollar01

It’s now well over 24 hours since that contact, and basically Mr Mooney not only has issued no correction, he hasn’t replied to, or even acknowledged, The Cable Gamer’s tweet. And it’s not like he was only being asked by one crank blogger. Others made the same point: 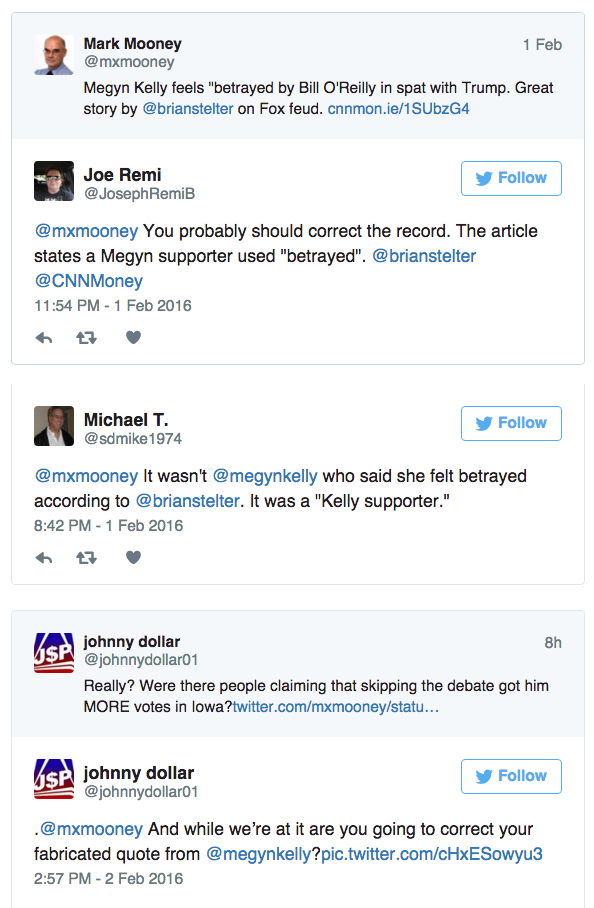 Mr. Mooney’s twitter account has but a few thousand followers. More damaging was when his tweet, complete with the fabricated quote, was retweeted by the author of the article Brian Stelter. Another 330,000 followers were served the phony quote, this time with the tacit endorsement of the article’s author. And yes, this was brought to Mr. Stelter’s attention again, but as we hit “publish” there has been no response:

There’s a name for this: stonewall. It wasn’t that long ago when a CNN correspondent was suspended over a tweet that wasn’t dishonest or fake, but simply opinionated. A suspension that Brian Stelter himself covered. Now we have a tweet where the “money quote” is fabricated. It’s tweeted out by two CNNers, then a cone of silence descends and everybody clams up. The forces that moved quickly to suspend Elise Labott instead take a newly lenient approach toward the reporters who impugned Megyn Kelly with a quote she never said. And nobody is talking.