The Cable Gamer isn’t sure how she found herself at a Fox-hating site this afternoon. Perhaps it was nostalgia for the days of The Cable Game 1.0, when exposing lies from the NewsHounds was a regular feature. But as soon as we dropped by we spotted this:

Don’t be shocked, but that headline is false. Whoops, we should have given a spoiler alert for that. But since the post is by NewsHound Priscilla, that really wouldn’t be much of a spoiler.

When somebody else says something that he feels is not accurate, he [O’Reilly] unleashes his patented fatwa, such as when he recently attacked a journalist for lying – an attack based on an O’Reilly lie!

The Cable Gamer will remind you you said that, Priscilla. John Anderson of Time described the movie version of Killing Jesus as a “critically eviscerated tv movie based on Bill O’Reilly’s novel.” O’Reilly took issue so naturally Priscilla had to take the other side:

The movie version of “Killing Jesus” did get some negative reaction.

So does just about every movie ever made. That doesn’t make it “critically eviscerated.” In fact, it was nominated for a best-movie Emmy! Aware of how lame that comeback was, Priscilla moved on to what she claimed is her main point, the O’Reilly “lie:”

The other bigger problem is that O’Reilly changed Anderson’s quote. Anderson did not use the word “novel” to describe “Killing Jesus.” He wrote, and I quote, “Killing Jesus, last year’s critically eviscerated TV movie based on Bill O’Reilly’s book, broke NatGeo viewership records.”

You expect this type of thing on biased right wing media, but isn’t Bill O’Reilly supposed to be a legit “no spin” journalist? If you’re going to be “fair & balanced,” be accurate.

A classy, sophisticated graphic is included to drive the point home: 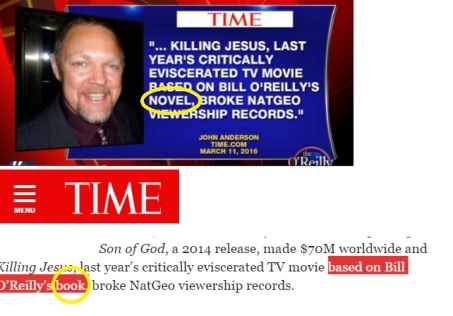 So why does The Cable Gamer say the NewsHound headline (“O’Reilly used a bogus quote”) is false? Because it is. O’Reilly’s quote was 100% accurate. It’s Priscilla who is not being truthful.

Guess what appears at the top of the article Priscilla quoted from? This:

A correction! Why did Priscilla leave that out? Guess what appears at the bottom of the article?

Did it, really? Why did Priscilla leave that out? Doesn’t this make two bold-type announcements above and below the article that Priscilla carefully avoided telling her readers about? But wait, let’s see how the article read before the correction—back when Bill O’Reilly spoke out about it. Thanks to the internet archive we have that information for you:

So the correction that Priscilla hid from her readers was Time changing “novel” to “book”—exactly the issue raised by O’Reilly. A correction that just happens to prove the NewsHounds post to be a worthless falsehood. Remember how Priscilla called Bill’s complaint “an O’Reilly lie?” It wasn’t. The only person who actually told “an O’Reilly lie” is Priscilla herself. But that’s to be expected from a NewsHounds writer with a record of flagrant fabrications about Fox News.

Don’t hold your breath waiting for the apology to Bill O’Reilly. Why do you think Top Dog Ellen Brodsky keeps Priscilla around after years of brazen dishonesty? Certainly not to say she’s sorry for doing her job: lying about Fox News.