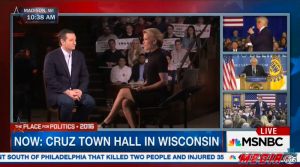 The Cable Gamer doesn’t remember ever seeing this sort of thing before. As Megyn Kelly was recording her town hall with Ted Cruz this morning (which aired on Fox News at 9:00 pm as scheduled) it turned up on MSNBC:

MSNBC went live to the camera of a network embed for just under 15 minutes around 11:30 a.m., when Tamron Hall was anchoring. Viewers of MSNBC saw and heard Kelly ask questions of Cruz as well as his answers. MSNBC staff at the event were approached by a campaign staffer a short time later, who asked the network to stop, someone with knowledge of the situation said.

What was MSNBC thinking? Does anyone believe they would take kindly to one of their competitors bringing a camera in to an event they were putting on and airing it live as it happened? The Cable Gamer is no lawyer but she has to wonder about things like proprietary material, commercial use of Megyn Kelly’s persona without consent, and other things with words even bigger than those. Maybe MSNBC was thinking along the same lines: after the town hall began they reframed the image to crop Ms. Kelly out of the picture, though maybe that did that just to be petty: 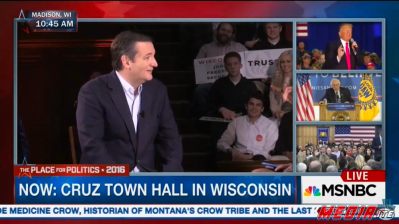 Whether there is a legal case or not this a low trick to pull, especially for a channel that’s trying to work its way back to respectability in the world of hard news. Cable Gamer Johnny Dollar called it “sleazy.” That may be an overstatement, but at best this was a bush-league move, something you might expect from the likes of One America News rather than an arm of the National Broadcasting Company. And Tamron Hall, fairly or not, may lose a few reputation points as well.