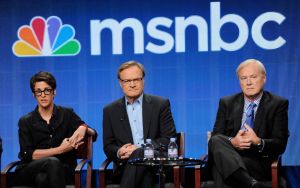 The news that two opinionizers, Rachel Maddow and Chris Matthews, will be co-anchoring MSNBC’s “hard news” coverage of the inauguration along with a diminished Brian Williams seems to have been greeted by media watchers as it always is: with a yawn. Like the increasing use of opinion people in reportorial roles it’s all but ignored as “media reporters” write eyewash about MSNBC’s newfound commitment to hard news and straight reporting.

Similarly, writers like Gabriel Sherman call Tucker Carlson’s ascension to FNC prime time “Trump TV.” Silly to anyone who actually follows Carlson’s career and libertarian instincts, even sillier when it’s used to characterize the entire channel. But when was the last time you heard Gabriel Sherman refer to MSNBC as “DNC TV?” Your Cable Gamer took a closer look at MSNBC prime time, using the last day where full posted transcripts were available: January 16. Who were the hosts, who were the guests, and how did they align? How many were left? Right? Pro- or anti-Trump? Let’s go to the transcripts:

All In with Chris Hayes:

The Last Word with Lawrence O’Donnell:

In three hours of prime time there was quite a spectrum of opinion: from pro-Obama to anti-Trump. But if you hoped to hear even one person with a viewpoint in favor of Trump or his proposals, you were watching the wrong channel, because there were none at all. Zero. It was as close to DNC-TV as you could get without just putting Donna Brazile in charge of leaking the questions.

In contrast, that night’s opinion programs on Fox News, while reflecting a right-of-center perspective, included people from the left like Mary Anne Marsh (D) and Jehmu Greene (D). Bill O’Reilly goes out of his way to include opposing views on his top-rated hour. Tucker Carlson Tonight, the show that so alarmed Sherman, has made its bones with the lively, often-riveting exchanges between Carlson and people who vehemently disagree with him. Only Hannity had no dissenting voices on January 16 (though usually he has at least one Democrat on).

Your Cable Gamer just made up the moniker “DNC-TV” for MSNBC prime time. Yet it’s far more truthful and on-point than the “Trump-TV” taunts from anti-Fox partisans like Gabe. Meanwhile, tomorrow MSNBC will reduce the discredited Brian Williams to the role of sidekick for two partisan co-anchors: a political hack, and a far-left talk show host.  And call it “news coverage.” 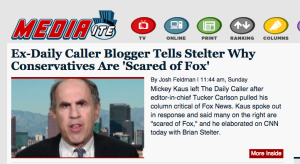 As we predicted the day the Tucker/Kaus story broke, Brian Stelter featured an attack on Fox News today. It took something of a double-bank shot to pull it off, because the story reflected on Carlson rather than FNC. But it was easy enough to engineer that sort of spin, and by this morning the dispute served as a seamless entré to demean Fox News.

At least one person didn’t react well to Mr. Stelter’s treatment of the story. Betsy Rothstein (who writes for Carlson’s Daily Caller) took to twitter and had more than a few pointed comments about Stelter’s presentation:

And Brian Stelter: how about reporting that this happens at nearly every outlet. For reporters who go on MSNBC too. This isn’t outlandish.

When a tweeter proposed that someone at Fox News who wrote a story trashing Roger Ailes would be “fired on the spot,” Ms. Rothstein replied:

Of course they would. The same goes for an MSNBC employee and Phil Griffin too. And CNN, Zucker. WaPo, Bezos. On and on.

At one point Mr. Stelter noted how independent he is because he had just talked about CNN. Betsy Rothstein was not impressed:

This morning Brian Stelter claimed he can be critical of CNN and it’s total bs. He lumped CNN mildly and vaguely in with other pubs who had somehow gotten the Secret Service story wrong. How? Who knows?

That was hardly some bold critique of CNN. And for him to act like it was, well, he’s delusional.

Fine Brian Stelter do what you say: investigate your boss Jeff Zucker in a seriously critical way. Then I’ll eat my words.

You want to critique CNN? OK, report how CNN hired a future murder suspect they knew was problematic.

Another story idea for Brian Stelter, who can allegedly critique CNN: A discrimination lawsuit against your network.

TCG could bring up Reliable’s feeble (or nonexistent) coverage of Fareed Zakaria, Jim Clancy, Carol Costello and the like, but that would be piling on.

Meanwhile, Mediaite put up its Reliable Sources dings Fox post in record time today: in less than a half hour, and while Reliable was still on the air! The adulation for Mr. Stelter at Dan Abrams’ website is something to behold. Of course, that Reliable post is currently Mediaite’s top story. Only it’s by Josh Feldman. Evan must be inconsolable.

Here’s a peek at some of what the two cable news media review shows will be featuring Sunday morning (courtesy FishbowlDC):

At the risk of tooting my own horn, TCG sort-of predicted one of those Reliable Sources names several days ago. Though to be honest, that’s like predicting tomorrow’s sunrise.

Mickey Kaus, a respected writer on all things immigration, writes a piece for The Daily Caller. The site’s big boss, Tucker Carlson, spikes it because it dings Fox News, where Tucker works. Kaus quits Tucker’s site, self-publishes the column, and the incident becomes our scandal du jour.

There are several weird angles to this. First among them is the column itself. Mickey Kaus is a sharp thinker on his area of expertise, but his thesis (that Fox News is deliberately suppressing coverage of immigration) is largely unsupported. The closest he comes to presenting evidence is a rundown of a string of Kelly File broadcasts. Why pick that program? Possibly because, having pre-determined the desired results, he wasn’t going to use either O’Reilly or Hannity, both of whom ride the immigration hobby horse far more than Ms. Megyn. Why pick just one program in any case? Wouldn’t a more broadly chosen sample give more accurate results? There’s more (like his head-scratching suggestion that Fox should be a feisty all-anti-Obama network—exactly the caricature its critics love to perpetuate) but that’s for another time.

Tucker Carlson’s response is also a little weird. It’s hard to understand why he’d compromise the work of the website he runs by taking an entire topic of discussion off the table. Is he really so enamored of his co-host role on Fox & Friends Weekend that he’ll outlaw any criticism of FNC? (For that matter, isn’t Carlson’s presence on the F&F curvy couch itself a tad weird? Why was he chosen, for his madcap comedic timing? Because they wanted someone who would balk at playing along in the outdoor segments, decline to eat on camera, and grumble about having to do an online after-show? Did they want a co-host who takes so many days off? But I digress.)

And then there’s the inevitable cluck-clucking that we can all see coming a mile away. It will be another chance to attack Fox (even though they have nothing to do with how Tucker runs his website) and skewer Carlson for not wanting to criticize the people who sign his checks. Only a few (like John Nolte) will point out the weirdness, and hypocrisy, of these critics—who routinely shrink from criticism of their employers.

This looks like a tempting target for the Sunday media shows. Can Reliable Sources resist? Will Brian Stelter pile on, instructing Tucker Carlson about the proper role of editors? Given how Mr. Stelter covered (or didn’t) Fareed Zakaria, Jim Clancy, Carol Costello etc., a lecture on journalistic courage from him would be weird indeed. 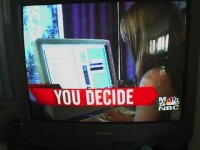 Pardon me while I retrieve my eyeballs from where they just bugged out, “Roger Rabbit” style. While I was busy snickering at an MSNBC “10th Anniversary” promo featuring Tucker Carlson saying “10 years ago, MSNBC set out to be the future of news….and it still is” (that’s actually true: by definition, the future never really arrives–it’s a theoretical condition that’s just out of reach, much like success is for MSNBC), Keith Olbermann declaring that his and his staff’s Attention Deficit Disorder determines “Countdown’s” content, Joe Scarborough calling the channel “activists for mainstream America” (whatever that means–but it sure doesn’t mean “objective”) and Rita Cosby declaring, in probably the most unoriginal boilerplate promo-speak ever scripted, “we take the news to the next level,” all capped off with a soundbite of Chris Matthews’ laugh, which, I’m sorry, sounds a lot like the first breath taken by someone who’s just had the Heimlich maneuver performed on them in a restaurant….this comes along. A promo for MSNBC’s new 3pm set of ratings waterwings, “The Most” with Alison Stewart, in which a chirpy announcer chirps: “Introducing ‘The Most’…the only show where you decide, we report!” 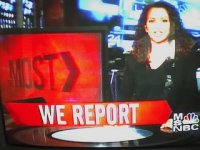 So many words and phrases leap to mind to describe this latest act of desperation by a drowning cable news channel…pathetic, desperate, borderline copyright infringement, just for starters. Intellectual property theft, perhaps. Insulting to the intelligence of viewers who MSNBC execs clearly hope might think…”ooooh…so this is the ‘we report, you decide’ network I’ve been hearing so many great things about…I better watch!”

So, just to clear up any confusion, allow me to correct any confusion MSNBC’s little shell game may have caused. The most-watched cable news program at 3pm is “Studio B” with Shepard Smith on the Fox News Channel…which, interestingly enough, has had as its guiding philosophy “We Report, You Decide” since day 1. Accept no substitutes, as they say.

The Cable Gamer can be reached at thecablegamer(at)gmail.com